Hello everyone, it’s Susannah here. I’m the Piggy-Mum to Mop, Billy, Cupcake, Pip and Cocoa. Since November, I have not posted. I supposed that makes it roughly 5-6 months which is quite shocking I guess.

You see… Recently, I have been taking steps to combat my depression and anxiety. It’s been a hard time for me, coming from a pit where I’ve blocked everything out and I just can’t be bothered to care into a place where I’m beginning to see things once again. Things are affecting me because I’m allowing them to and its hard not to shrink back into the darkness that kept me safe for so long.

It was due to my depression that my posts started going downhill in the first place. I just… I just couldn’t be bothered to make a post. I know it sounds horrible but I’d stare at my laptop or at my iPad with motivation the size of a pea. It was too hard to actually dredge up that happiness to make my posts sound happy and chatty. I just couldn’t do it so I just left it, even though I did want to share my guinea-pig stories with you.

You see, my piggies are very important to me, but for a while I didn’t really pay much attention to them. I fed them and watered them and cleaned them out but left the cuddling to other people because leaving my room and going downstairs to see them was just too difficult. It’s hard to describe how that feels but, well, when you don’t even have the mental energy to go down a single flight of stairs, there’s probably something a bit off.

As it stands, well, I think I’m on the up. I still get down, the dark clouds still creep over and cover my head but I have my guinea-pigs. I still have all five of them, my little precious ones and I’m looking forwards to getting them some awesome c&c cages after my exams.

I just… Well, wanted to explain. I’m only just getting to that stage where I can say, out loud: “Yes, I am, was, depressed.” Because, for so long, I denied it. I didn’t want to face the facts because I felt awful for being depressed. I have things, I have food and water and a loving family and a house and belongings and guinea-pigs and rabbits and hamsters. How could I be depressed? How could I be so selfish when, every day, people survive and are happy on much less than what I had.

Then, I realised, it isn’t like that. Depression isn’t something that only strikes those who have nothing. It’s a monster that can grab you and sink its teeth in at any time, no matter how much you try to shake it off. Realising that I hadn’t done anything wrong, that I wasn’t an awful human being for feeling this way was the first step.

Pasting on a smile was the second!

The hooman (and a very cute Cupcake :3) xx

What Are YOU Doing?

I was having a likkle photoshoot with Mummy…

When all of a sudden, when her back was turned…

POOF! There was an elf on my back.

“We were just having a cuddle, human, honest!”

Posted in From the Piggy Lips

Happy Thanksgiving to all those people across the sea in that fine place we know as America. As I live in England now I do not celebrate this day but that doesn’t mean I don’t appreciate what it means for those who do.

I will soon be embarking upon my own journey, though. Tonight is the night!

Whee pigs are often lucky enough to sit with our Mummy while she is doing work, cuddled up in bed or watching the TV. This introduces us to a lot of hooman culture, as you can well imagine. You already know of our love for Alvin and the Chipmunks (best movie, eva!).

Another favourite of ours is Spirit: Stallion the Cimarron. Mummy loves horses you see, not as much as she loves guinea-pigs I hope but yeah, she finds the time for her ponies each week. It’s hard to share her but some things whee just have to do, eh?

Whee love Spirit, the movie, and whee also love the soundtrack. So, imagine our jealousy when whee heard Mum was going to see the performer live! For those of you who don’t know, Bryan Adams sings the soundtrack for Spirit and on his tour he came to the arena near us! He was so close yet so far…

But Mummy got to go! She left us to wait for tales and went dashing off to watch him. She brought back a programme but apart from eating it, there isn’t much whee can do. Ah, we’ll just have to be content with listening to his music on her tiny-blog-typing machine. She often listens to her tunes while she cleans us out.

Do you have any favourite tunes? Any movies that you love? Whee’d love to know some so that whee can listen to them too, hehe!

Mummy did not take this photo but it is part of the same tour!

Til next time, chaps and chapesses,
Billy xx

Posted in From the Piggy Lips

I just found this old picture of Whizz and Dusty, they’re glowing!

I was brought into this world by our dear little pig friend, Bacon. But a life across the pond beckoned to me…

Well, after a long and arduous journey I have arrived! Arduous, isn’t that a big word? Arrrrduuuouus. Nah, won’t be using that one again, lol! So, I got here and after being unceremoniously peeled from my packaging bed, I met my brand new friends.

They’re guinea-pigs. I know right? Isn’t that cool! I’m already fast learning their language, it consists of a lot of squeaks and wheeks. Tip top, old chap and all that, eh?

Well, the first thing I had to do was pick a name. Well, I say I. The pigs picked it for me. They chose the name Timothy, or Timmy for short. A dog from the famous five, that mean anything to you? Me, a dog?! Ah well, when my activation period starts, they’ll soon learn! Activation, that’s another cool word. Sorry, I’m just beginning to speak and I am loving it!

The second thing was to find a spot to sit.

This spot is too low! 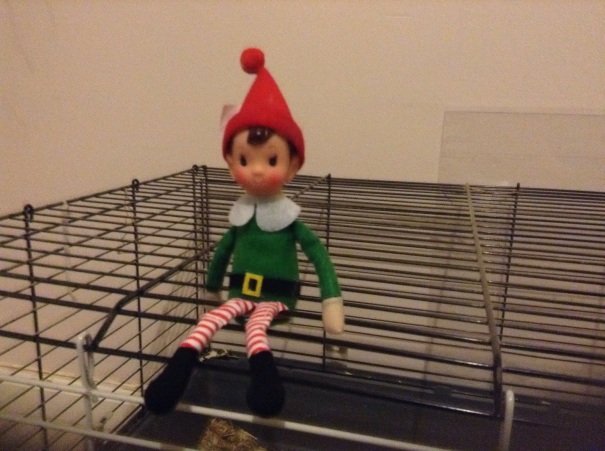 This spot is far too uncomfy! Not to mention the rabbits, eek!

This spot is just right! A real shelf for this elf.

P.S. Thanks a bunch, Bacon!

One day, many long months ago, I asked you dearies a question which you very kindly answered. I said: “Would you rather face a dozen guinea-pig sized horses or a dozen horse sized guinea-pigs?”

Mummy’s model horses were nice enough to star in the picture so that you could see what it would be like to have a dozen guinea-pig sized horses. Mayhem, whee reckon. Luckily, the little horses around me were plastic and not up to much.

Turns out our darling Mummy has been busy. Her herd has grown! 62 model horses, should whee be worried? That does seem an awful lot to me, dearies. As long as they stay upstairs, eh?